Rashid Khalidi Steps Up His Game 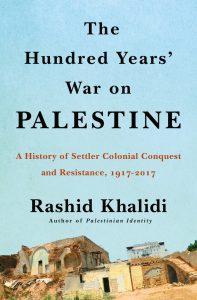 There was an urgency about Rashid Khalidi when the dean of Palestinian-American historians addressed a jam-packed crowd at the prestigious Politics & Prose bookstore in DC, Feb. 10. He told us he was taking off the academic gloves in his new book, “The Hundred-Years’ War on Palestine.” “This book is more personal,” he said. It draws on his illustrious family’s more than hundred years’ experience witnessing and directly confronting the “colonial invasion” of his country, continuing to this day in his own work as an academic truth-teller.

A questioner challenged Khalidi as to whether he was faithful to the historian’s duty of “objectivity.” He replied, “The fact is there is a hegemonic narrative about Israel and Palestine, which takes the Western, pro-Zionist perspective. Eighty percent of what is said about the issue in the U.S. sticks to the hegemonic narrative. It’s not my job to repeat that narrative. Besides, historians, in fact, usually advance an argument or thesis. They don’t just say, ‘On the one hand or on the other hand.’ ”

Khalidi said the book deliberately aims at “general American readers,” who often know next to nothing about Palestine-Israel and, at best, see the conflict as a tragedy of two peoples struggling for their rightful national destiny. But, he argues, the real story is of a “colonial conquest” by the West of the small land of Palestine – and a subsequent endless crushing of Palestinian resistance. “The Palestinians are David; Israel is Goliath, with its external supporters.” Since 1917, supporters have always included the world’s hegemons: Great Britain, the U.S., the U.S.S.R. (in the run up to statehood), and France (in the 1950s). Just as essential has been the material and political support of vast ethnic and religious networks of Zionists (think Christian Zionist).

People need to understand that Israel is a settler-colonial state, Khalidi said, but a unique one. The European Jewish colonists — who literally called themselves colonial before colonialism fell into disrepute after World War II — did not come from a “mother country” and were not part of another nation, such as Great Britain. Rather, they came from many countries and were members of a “totally modern national movement.” The history of the Jews began in Palestine in Biblical times, but “establishing a national state was not what Jews ever wanted” before the late 1800s invention of Zionism.

In 1899, Khalidi’s great-great-great uncle, Yusuf Diya al-Din Pasha al-Khalidi, understood the motives and aims of the early Zionist settlers. A former mayor of Jerusalem, fluent in Turkish, German, French and English, he knew about European anti-semitism and the writings of Zionism’s founder, Theodor Herzl, calling for a Jewish State. He sent a long letter in French to the French chief rabbi to be passed on to Herzl, who had long lived in Paris. He expressed sympathy and understanding for Zionist aspirations. But he warned it would be “folly” to try to impose a Jewish State on the Palestinians, who fully inhabited Palestine. He beseeched Herzl to abandon any such intentions. He pointed out such a move would undermine the extensive Jewish communities that long had existed throughout the Middle East. Herzl’s reply was polite, Khalidi told his audience, but it “simply ignored” Yusuf Diya’s basic point that Palestine was already inhabited by people unwilling to be supplanted.

And so began the continuing pattern of Zionists and their state sponsors dismissing Palestinians as insignificant, if not nonexistent. On that point, Khalidi cited as landmarks the 1917 Balfour Declaration; the League of Nations Mandate for the U.K. to rule Palestine; the 1947 UN Partition Resolution, which was “bulldozed through the General Assembly by the U.S. and the U.S.S.R”; the U.S. greenlight given to Israel in 1967 to conquer the West Bank, Gaza and the Golan Heights from neighboring Arab states; the UN response to that aggression in Resolution 242; all the way to President Trump’s just-released “peace plan.”

In closing, Khalidi asserted that “all nationalisms fabricate a history to justify themselves.” But the “particular and peculiar” thing in the case of Israel is that the “trauma and ideas that generated Jewish settler-colonialism all happened in Europe, but were moved to Palestine.” In other words, for more than 100 years the Palestinian people have had a Jewish nationalist dream working itself out in their land, taking their property and destroying their rights and dignity and their very lives.

In the beginning, there was Palestine. Transforming it into the “The Land of Israel” has meant looking past the Palestinians who live there, “disappearing” them physically when possible, and all the while delegitimizing their story. Khalidi, the scion of an ancient and honored family, breaks the spell of the nationalist dream by exposing us to the existence of the Palestinian people, then and now, and telling their bittersweet story.