EPF PIN member Harry Gunkel writes about his time in Alabama and makes connections about what standing witness means in our work for Palestine. 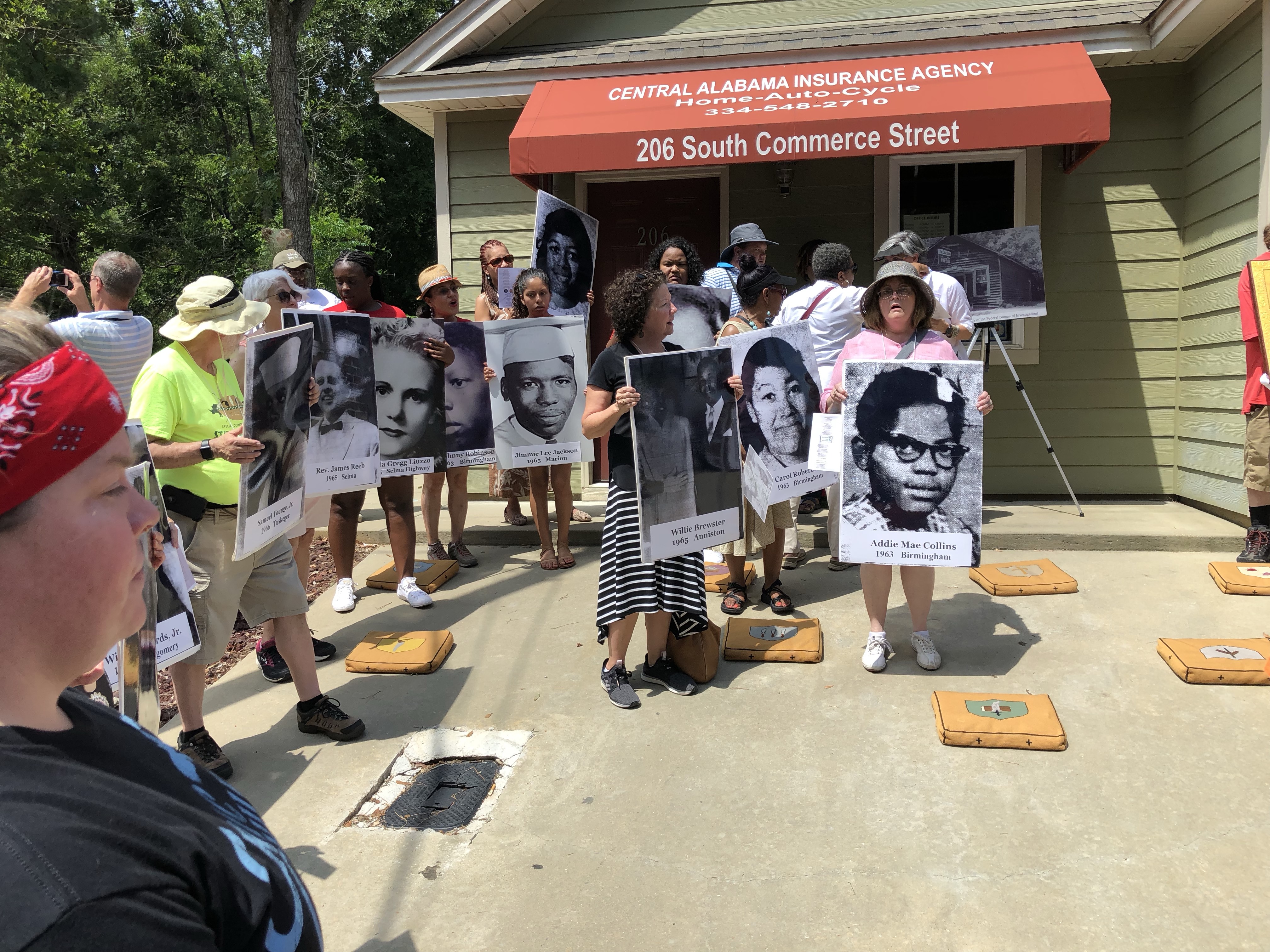 The humid, sweltering August heat of Black Belt Alabama enfolded us all as we stood at the former site of Varner’s Cash Store in Hayneville. On this spot on another August day in 1965, Jonathan Myrick Daniels and three companions, including 17-year-old African American Ruby Sales, were about to step into the store to buy cold drinks. They had just been released from the crude jail around the corner where they had been detained on arrest for protesting against suppression of African American voters in Alabama. A man with a shotgun, born and raised in racism and enraged about the civil rights movement and its activists who had come to Selma and Montgomery that spring and summer, met them at the door. Seeing the man’s rage, in the few moments he had, Jonathan pushed Ruby behind him, took the point-blank shotgun blast, and died as he fell.

This past August 10, about 300 of us came to Hayneville on pilgrimage to remember Jonathan and the many who died in the struggle alongside him. We stood in silence at this place of his martyrdom, quieted by the immense grace of Jonathan’s Christ-like action. A few of us sang Swing Low, Sweet Chariot. Many kneeled on the hot pavement and bowed in veneration. There was ineffable power in the occasion and in the place, where Jonathan showed us all what following Jesus even unto the cross actually means.

The pilgrimage for Jonathan and the martyrs of Alabama was co-sponsored by the Episcopal Peace Fellowship thanks to the dedication of Executive Director Melanie Merkle Atha, who grew up just down the road from where we stood. On the day before our witness in  Hayneville, our EPF group had visited the National Memorial for Peace and Justice and Legacy Museum in Montgomery. The Memorial, sometimes called The Lynching Memorial, shakes you to the core. Brilliantly conceived and created, the memorial leads the visitor on a path through hundreds of hanging steel monuments, each representing a county in the US where terror lynchings occurred. Names of people known to have been lynched are chiseled into the monuments. The names are difficult to read in the rust-colored steel; difficult to read through the tears. This memorial, set on the blood-soaked soil of lynching and dedicated to the legacy of enslavement and terror of black people, demands that we examine our own thoughts and actions and hold ourselves responsible and accountable. It demands that we not forget what happened and that we not countenance it, no matter how subtly. It demands that we not look away or be cowed into silence by the phony excuse of good manners and civility. 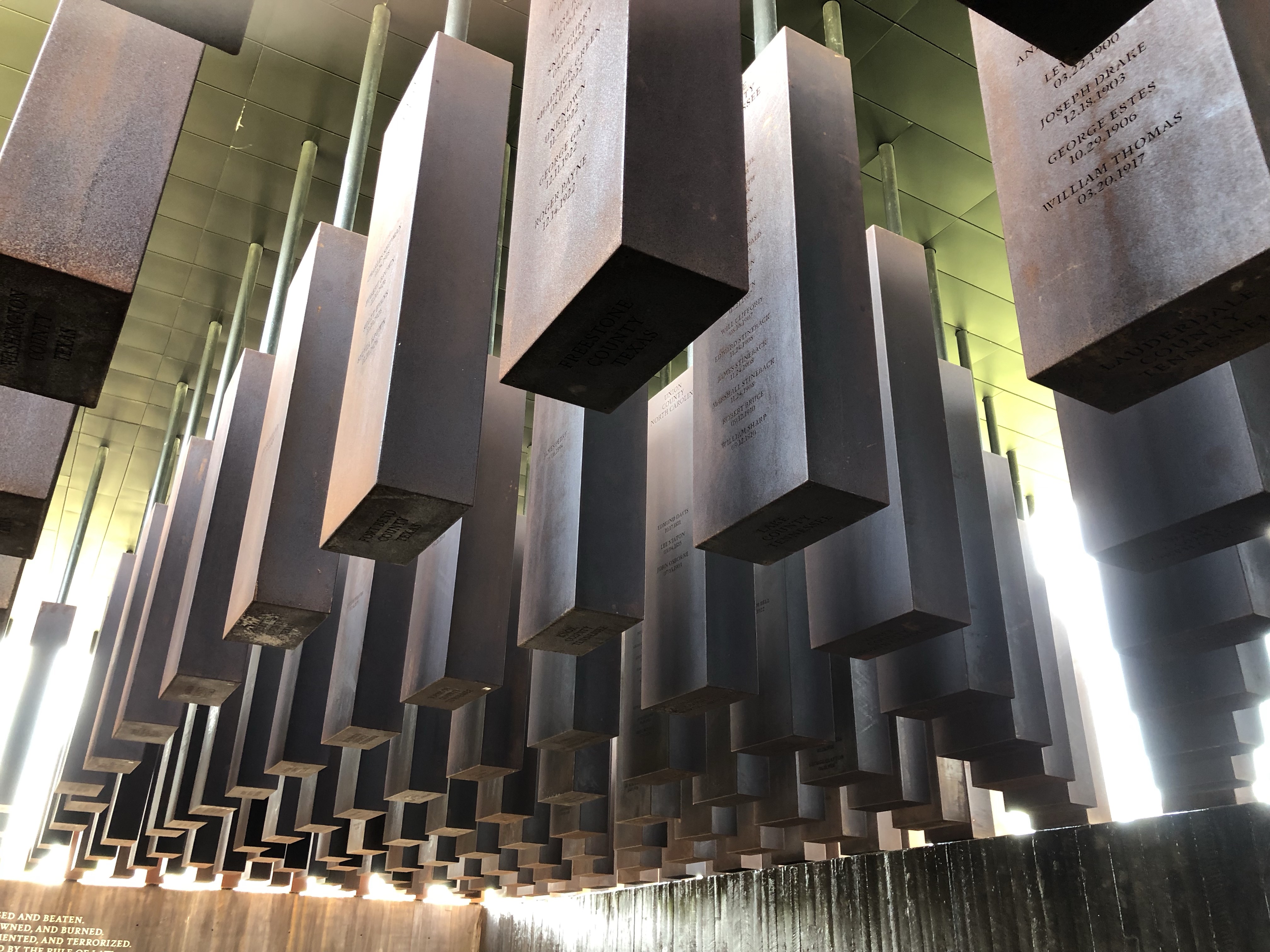 All through these days of remembrance and atonement I heard echoes – in the memorial, in the museum, and in the streets of Hayneville, Montgomery, and Selma. Echoes of other martyrs, in other places. While the never-ending, noble and ferocious struggle for equality and justice for people of color in the US continues, half a world away their Palestinian brothers and sisters also face a supremacist regime where demanding justice is a capital offense. The Black Lives Matter platform recognizes the kinship of their struggles. Palestinians in the state of Israel are thwarted in employment, housing, education, and civic and political engagement by dozens of discriminatory laws rooted in Jim Crow. Thousands of Palestinians in the West Bank understand incarceration as a weapon of the state to silence and subdue them. And Palestinians understand lynching; it is their neighbor or their son or their sister lying dead in the street, executed on suspicion.

I cannot help but think of Rachel Corrie. In Gaza in 2003 she stood before an Israeli military bulldozer to block its demolition of a Palestinian home, but was murdered when the driver ran her down, perhaps consumed by the same primal hatred that had come for Jonathan 30 years earlier.

But Rachel and Jonathan did not just show up one day in Gaza and Hayneville. By all accounts, their young lives embodied a deep and indelible drive to do good, to be honest, to be just. It was surely their profound and transcendent determination that brought them with their crosses to Gaza and Hayneville. Their violent and tragic deaths should not be read as calls to all of us for martyrdom. For a very few, perhaps, but for most of us, it is Jonathan and Rachel’s lives, not their deaths, that are our call. All of us – you, me, princes of the Church – can best honor Jonathan, Rachel, and the martyrs of Alabama and Palestine by emulating the sincerity of their purpose, the unyielding determination of their journeys, the fearlessness of their actions, and the ideals of their vision.