The Episcopal Church Must Renounce Israel’s Blockade of Gaza

Q. Do you renounce the evil powers of this world which corrupt and destroy the creatures of God?

The Episcopal Church Must Renounce Israel’s Blockade of Gaza

The coronavirus pandemic of 2020 rapidly ballooned into a global catastrophe. Not a single corner of this big beautiful planet was untouched. No place was remote enough to be safe as the virus played out its life cycle and left illness, shattered lives, and death in its wake. But in wondrous, widespread displays of humanity, the virus was accompanied by acts of human kindness, generosity, and compassion as people distanced, stayed home, offered help, and donated what they had. The caring responses have been as epic as the epidemic.  But the people of the Gaza Strip found no succor or relief.  Israel saw to that.

Make no mistake, the virus reached Gaza, a place where population congestion and density make it a tinderbox. Even before the pandemic it was unlivable. The military blockade by Israel has made it so, not least because of the lack of health care access and resources. Israel’s response to the catastrophic threat of coronavirus in such a place? Business as usual.[1]

EPF PIN member Dr. Tom Foster visited Gaza on a medical mission in February 2020, just days before lock-downs and quarantines began. He reported from one physician there, “…the five-year survival for a newly-diagnosed breast cancer patient in Gaza is 50%.  In Israel, just a few miles away, the five-year survival is 85%.  There is no radiotherapy in Gaza.  Chemotherapy is in short supply…Appeals to cross the blockade to receive care in Israel or the West Bank are routinely delayed or simply denied.  These patients suffer and die.” And he saw that “at the Al Awda Hospital, a fluoroscopy system sits dormant awaiting a $3,000 circuit board, the delivery of which Israel has blocked for months.  This is common in Gaza.  At the Al Quds Red Crescent Hospital, a new CT scanner has been delivered, but the workstation that enables its advanced cardiac applications has been held up at the blockade.”

Health care has been the particular focus in 2020, but the blockade of Gaza, in place since 2006, touches everyone and every aspect of life within the Strip. Inadequate food, shelter, and employment are pervasive. Children are anemic and under-grown, sewage lies in pools of filth adjacent neighborhoods, and electricity is scarce. Against this background, even at the peak of concern and risk in mid-April, Israel’s forces made life even worse for the people of Gaza – continuing the practice of firing on fisherman eking out their subsistence livings within their prescribed limits off the coast, while aircraft sprayed herbicides on agricultural fields.[2]

The difficult stark realities of COVID-19 bring a question to new urgency – What are the limits of inhumanity, of cruelty and barbarism that the world will afford the state of Israel? When will people of faith raise voices of prophetic truth against these atrocities in the Holy Land? Eloquent, prescient writers around the world have offered a vision of life after COVID. They invite us to humbly take account of what we have lost or what has been threatened by the awful experience. What matters? Can the small acts of care and kindness that arose amidst crisis become the new normal of all our days?

We must ask these questions not just of ourselves but must demand the same of nation states. In this time of crisis, which cries out for compassion, Israel’s transgressions stand out with shameful clarity. The historic suffering of the Jewish people and their right to live in safety and peace in the Holy Land are neither doubted nor disputed, but those circumstances can never justify or excuse the wanton oppression of the Palestinian people.  It is time to hold Israel accountable, to demand adherence to international law and treaties, to assert the power of common good and relieve the people of Gaza of their long bondage.

“The whole of Gaza’s civilian population is being punished for acts for which they bear no responsibility. The closure therefore constitutes a collective punishment imposed in clear violation of Israel’s obligations under international humanitarian law.” International Committee of the Red Cross, June 2010

“…during the Great March of Return, Israeli soldiers committed violations of international human rights and humanitarian law. Some of those violations may constitute war crimes or crimes against humanity…. Particularly alarming is the targeting of children…122 people have had a limb amputated since 30 March last year (2018). Twenty of these amputees are children.”  The UN Independent Commission of Inquiry on the 2018 Gaza protests 28 February 2019 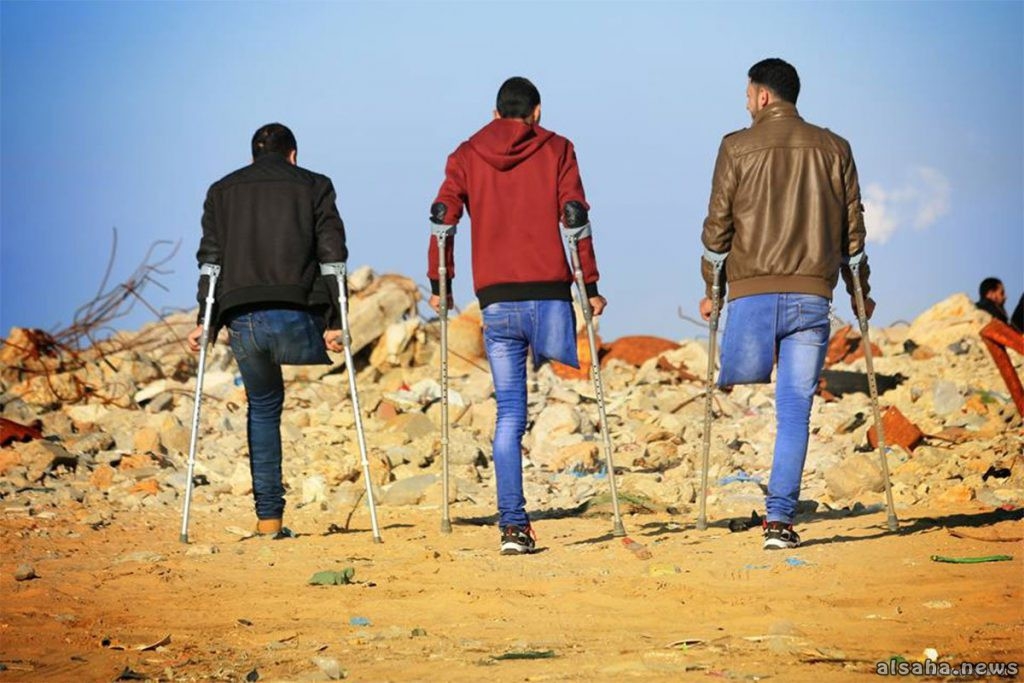 The Episcopal Church has long been critical of Israel’s illegal blockade of Gaza, where since 2006 a population of 2 million have struggled to survive in the equivalent of an open-air prison.

2006:  The Episcopal Church called for Israel to end its choke-hold on Gaza.

2014:  Following Israel’s brutal 51-day Operation Protective Edge that summer, our Church called for the sustainable rebuilding of Gaza.  Israel’s 2014 war on Gaza resulted in nearly 1,500 civilian deaths, including 532 children. Over 10,000 Palestinians were injured, 20,000 homes were destroyed, and 108,000 people were rendered homeless.

2018:  The Episcopal Church backed the U.N. investigation of the use of lethal force against civilians (General Convention Resolution D027). As of December 2019, the UN and other international agencies placed the number of civilians killed during the border protests in Gaza at over 200. More than 9,000 have been injured, most shot by Israeli snipers and suffering “life changing wounds”.

Thus, we have called, we have urged, we have demanded as Israel’s violence against the indigenous population of Palestine continues unchecked. Although not uniquely ours, we American Christians share a burden of complicity in that US political support and $3.8 billion each year in military aid enable Israel’s relentless human rights violations. So, with what tools, what mechanism, do we live into our covenant to renounce the evil powers of this world that corrupt and destroy the creatures of God?

We appeal to the Episcopal Church to join faith leaders around the world in endorsing and actively supporting the nonviolent Boycott, Divest, and Sanctions campaign as a tangible expression of our faith.

“And I remain forever hopeful that, like the nonviolent efforts that have preceded it, the BDS movement will ultimately become a catalyst for honest peace and reconciliation for all our brothers and sisters, both Palestinian and Israeli, in the Holy Land.” – Archbishop Desmond Tutu, 2014